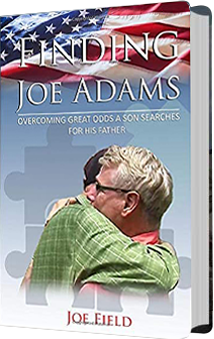 Sixty years of not knowing who my dad was. That’s a long time. Yes, it’s true—I was never adopted. And yes, my birth certificate just showed a blank line for “father”. And it didn’t help that my mother died when I was 37, taking her secrets of my dad to the grave with her.

Did I care that my dad was a mystery? Not so much in the beginning. Life was a struggle, then busy, then a struggle again. And then life settled down. That’s where you’re supposed to have peace. But a lifetime of drips on the forehead, “who is your dad, who is your dad?” could not be silenced. Like a teapot simmering on the stove my ‘having to know’ reached a boiling point. And then God answered.

Maybe you’re there. Or, maybe you’re in the simmering mode and wonder if it’s worthwhile to finally “know”. There is a certain fear about that. A notion that your long-lost family member might say ‘get lost’ or, might be a loser or thug. Scary and potentially hurtful territory. But deep down inside you still need to know. It’s at least a curiosity for sure, particularly if you were adopted and have no complaints about your lifelong parents. But in other cases there is more than curiosity. Your very identity is being yanked.

My memoir describes a life, with a father and without a father. Since most of my life took place without him there is more of that in the book. But that part of my life was eventful, a mix of Forrest Gump meets The Pursuit of Happyness. In a manner of speaking, it’s entertaining to read. But since finding my dad produced such an emotional epiphany my memoir ends strong. I can thank my dad, and seven new siblings, for that. How they received me should be the ‘gold standard’ for those similarly situated. What a sweet family.

For others in my situation this may not have gone as nicely. In fact, it might have been disastrous. I feel awful for you if that’s so. Your vulnerability was trounced. Like having your hand slapped when all you wanted was a handshake. Your whole identity was on the line. Despite my confidence as a lawyer if my new-found family had said “scram” to me I would have been devastated.

It is my hope that my book will help those who are seeking long lost family but also that it will prep those who are on the receiving end that call or email. Just take it a day at a time. Don’t put unneeded pressure on yourself.

And, it is my hope that you will be encouraged by the fact that persistence pays off and that God is not as far off as you might think. As I say in my book “when all else fails, fail. … but then build again.” Give yourself permission to rest. It is what I call the “power of the pause”. Pause. Accept being where you are. But don’t overdo it. Don’t surrender to ruin. Call upon the power that created “all that is seen and unseen”. Get back up, take that one step. And then another.

And watch the magic unfold.

Joseph Field is an Author, Blogger and Senior Attorney

My mission is to help empower others in similar situations through my story, my blogs and my books.